After a long sideways trend, Cardano (ADA), the 7th largest cryptocurrency by market cap, has managed to record its highest daily close ever at $1.4798 on the Binance exchange.

The new significant level was first noticed and reported by U.Today. At the time of writing, ADA is trading at $1.49, with a relatively 12% price upsurge in the last 24 hours.

The cryptocurrency is currently printing one of the highest performance among other top 10 digital currencies in the market. 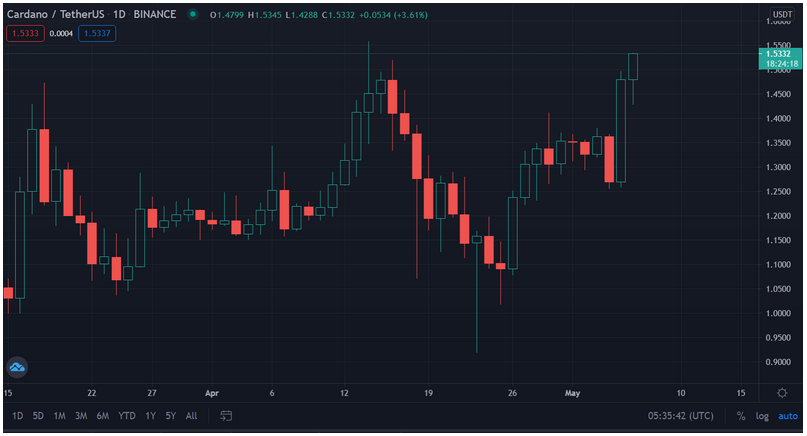 The current outstanding performance has been attributed to the recent partnerships sealed by IOG, the software firm behind the development of Cardano (ADA).

A few days ago, IOG sealed a partnership with Ethiopia’s Ministry of Education to create a blockchain-based national ID and attainment recording system.

According to the report, the partnership will bring over 5 million students and 750,000 teachers to the Cardano network. The firm described the new development as the largest blockchain deployment in the world.

A few days later, IOG announced another partnership with World Mobile, the first mobile network built on blockchain, to build a new mobile network in Africa, starting from Tanzania.

All these notable partnerships gave Cardano huge publicity, but the impact did not reflect on the price of the digital token ADA until recently.

Back in February 2021, Cardano (ADA) gained vast popularity after soaring 350% in preparation for the Mary protocol update that was implemented in March, which transformed Cardano into a multi-asset blockchain. But over the past few months, ADA has mostly traded sideways.

So, as aforementioned, the current magnificent price uptrend, which resulted in recording its highest daily close ever, can simply be attributed to the record-breaking partnerships in Africa.

It’s also noteworthy that the community is anticipating the Alonzo hard fork that will bring smart contracts functionality to the Cardano blockchain.