Cardano Price Forecast: ADA sets the stage for a 50% advance

Cardano price has shaped a bullish cup-with-handle base that projects a notable rally moving forward. Speculators should consider the recent Polygon (MATIC) rally as proof of the potential for long trading ranges.

For over a month, between March and April, Polygon (MATIC) transacted in a 55-60% trading range before releasing a powerful 100% rally over five days. MATIC was one of the first cryptocurrencies to achieve an all-time high following the April correction.

Fast forward to today, and there is a similar situation unfolding in ADA. It has been in a 50% trading range for two months with few hints of a pending breakout to the upside. However, from April 14 until today, Cardano price has shaped a cup-with-handle base on the intra-day chart that is beginning to display signs of a breakout.

It is important to note that the 2018 high at $1.397 has heavily influenced the upper section of the ADA trading range. In fact, the handle closely aligns with the 2018 high.

If Cardano price is inspired by the Polygon precedent of a quick 100% gain, aggressive ADA speculators should cast their sights on $2.968. 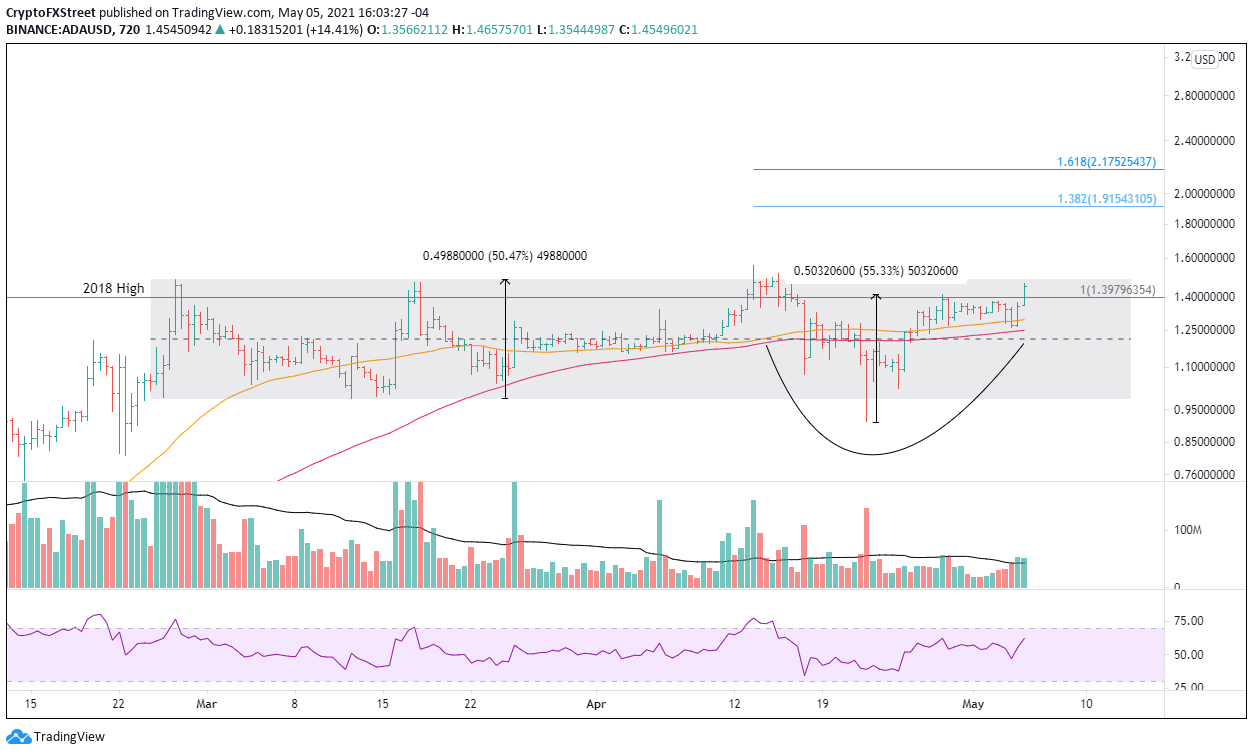 Of course, Cardano price could fail once again and revert lower. The first important support is the combination of the 10-week simple moving average at $1.217 with the midline of the trading range at $1.211. Any measurable weakness below those levels will not meet any support until the psychologically important $1.00.

To advance the bullish outlook, the IntoTheBlock In/Out of the Money Around Price (IOMAP) data highlights tremendous support (in the money addresses) from $1.21 to $1.38. The breadth of the support indicates that it will be challenging to overpower Cardano price until at least the midline of the trading range.

Due to the closeness to the high, ADA has almost no resistance (out of the money addresses) standing in front of a new all-time high.

Opportunities reveal themselves in different ways, and ADA has offered some clues to suggest that it may be ready for a significant rally.